, /PRNewswire/ -- Have you ever wished there was technology that automatically turned on the front porch lights before your (NYSE: DPZ) pizza is delivered?  Now there is, thanks to a partnership between Domino's and IFTTT. 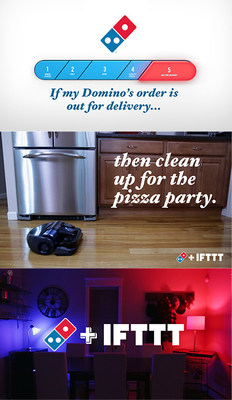 The IFTTT platform is a free service that allows people to add and create countless connections between digital devices and services with simple conditional statements, called Applets. Customers are able to create customized Applets for many of the services and devices they use or own. Domino's, the recognized world leader in pizza delivery and digital ordering platforms, is the first restaurant brand to join the IFTTT platform.

To jump-start users' creativity, Domino's has created a few useful IFTTT Applets, including one that will automatically turn off their sprinklers when Domino's Tracker says their order is out for delivery. Customers can also download a Domino's Applet that turns on their Samsung POWERbot when their order is being prepared – perfect for when the house needs a good vacuuming before the gang stops by for a pizza party.

"We understand how much people love using Domino's Tracker, not only to know where their order is in the preparation and delivery process, but also to plan around that much-anticipated pizza arrival," said , Domino's senior vice president – chief digital officer. "And now we're empowering customers to unleash their imagination as they create new ways to integrate some of our favorite innovations, like Domino's Tracker, into their everyday lives. Thanks to the endless possibilities of IFTTT Applets, customers will be more connected than ever."

To view videos of IFTTT demonstrations and instructions for the Domino's IFTTT Applets, visit www.ifttt.com/dominos or www.youtube.com/dominos.

Founded in 1960, is the recognized world leader in pizza delivery, with a significant business in carryout pizza. It ranks among the world's top public restaurant brands with a global enterprise of 14,000 stores in over 85 international markets. Domino's had global retail sales of nearly in 2016, with more than in the U.S. and more than internationally. In the first quarter of 2017, Domino's had global retail sales of nearly , with over in the U.S. and nearly internationally. Its system is primarily comprised of independent franchise owners who accounted for over 97% of Domino's stores worldwide as of the first quarter of 2017. Emphasis on technology innovation helped Domino's reach an estimated in global digital sales in 2016, and has produced several innovative ordering platforms, including Google Home, Facebook Messenger, Apple Watch, Amazon Echo, Twitter and text message using a pizza emoji. In late 2015, Domino's announced the design and launch of the DXP®, a purpose-built pizza delivery vehicle, as well as Piece of the Pie Rewards™, its first digital customer loyalty program.

To view the original version on PR Newswire, visit:http://www.prnewswire.com/news-releases/dominos-delivers-life-hacks-with-ifttt-applets-300448171.html