Domino's Pizza® Celebrates the Opening of Its 10,000th International Store

, /PRNewswire/ -- , (NYSE: DPZ), the largest pizza company in the world based on global retail sales, is celebrating the opening of the brand's 10,000th international store today. The store is located in the at in the of . 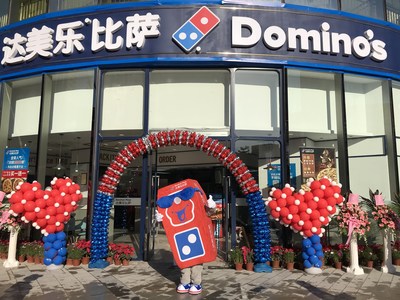 "Not only are we excited to open the 200th Domino's location in mainland , but we are thrilled that it marks the brand's 10,000th store outside of the U.S.," said , chairman of – Domino's master franchisee in . "We look forward to bringing our delicious pizzas, quality products and delivery expertise to customers in ."

The store features the pizza theater design, which is open-concept and allows customers to watch the action of pizza-making. Its spacious design, which features more than 1,300 square feet, includes indoor seating for customers as well as a flat-screen TV that shows the status of customers' orders, from the moment the order is placed to when it is out of the oven.

"The Domino's brand is continuing its global growth momentum by opening new stores every day," said , executive vice president of Domino's International. "We're incredibly proud to celebrate the opening of this milestone store, as it is located in a vivacious city bustling with e-commerce and technology enterprises. We look forward to bringing the best carryout and delivery experience to those in ."

Domino's operates in more than 85 markets worldwide, with more than half of its global retail sales coming from international stores.

About ®
Founded in 1960, is the largest pizza company in the world based on retail sales, with a significant business in both delivery and carryout pizza. It ranks among the world's top public restaurant brands with a global enterprise of more than 15,900 stores in over 85 markets. Domino's had global retail sales of over in 2018, with nearly in the U.S. and more than internationally. In the fourth quarter of 2018, Domino's had global retail sales of over , with nearly in the U.S. and more than internationally. Its system is comprised of independent franchise owners who accounted for 98% of Domino's stores as of the fourth quarter of 2018. Emphasis on technology innovation helped Domino's achieve more than half of all global retail sales in 2018 from digital channels, primarily online ordering and mobile applications. In the U.S., Domino's generates over 65% of sales via digital channels and has produced several innovative ordering platforms, including Google Home, Facebook Messenger, Apple Watch, Amazon Echo, Twitter and text message using a pizza emoji. In late 2017, Domino's began an industry-first test of self-driving vehicle delivery with – and in , launched Domino's HotSpots®, featuring over 200,000 non-traditional delivery locations including parks, beaches, local landmarks and other unique gathering spots.