ANN ARBOR, Mich., Oct. 6, 2014 /PRNewswire/ -- Domino's Pizza (DPZ), the recognized world leader in pizza delivery, has found its voice. Dom, the virtual voice ordering assistant for Domino's, is at your service via Domino's ordering apps for iPhone® and Android™. 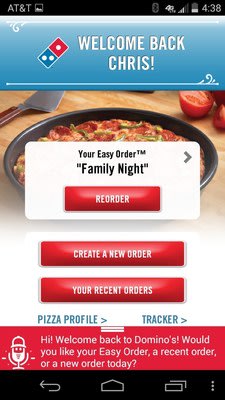 In conjunction with Nuance Communications (NUAN), Domino's launched its voice ordering platform in June – marking a true first within both traditional and e-commerce retail. And Dom is the digital voice on the other side of the conversation that will make it all happen.

"Mobile customers are not only going to love the ease of this landmark ordering experience, but they now have the opportunity to have some fun with Dom himself, who has a few more things to say than before," said Patrick Doyle, Domino's Pizza president and CEO.

"I'm many updates wiser than when I first started," said Dom, who will make his national television debut in a campaign beginning today.

While this will mark the first time the technology innovation has been promoted nationally, many customers have already come to know Dom and his positive attitude and professionalism on the job.

"My motherboard and fatherboard raised me right," said Dom.

Dom is available for a variety of personalized ordering needs – which include taking an order for carryout or delivery, handling saved Easy Orders, suggesting additions to a meal and finding coupons for the best deals. Whatever the ordering need, he is available and ready.

** All Dom quotes in this release are responses you can actually hear him say. Download our ordering app for your mobile device to hear these and more…and of course, order from Domino's! **

** To see the reactions of people as they are introduced to Dom, watch the footage on the Nuance Enterprise YouTube Channel: http://youtu.be/VxqCmZZUkro **

Founded in 1960, Domino's Pizza is the recognized world leader in pizza delivery, with a significant business in carryout pizza. It ranks among the world's top public restaurant brands with its global enterprise of more than 11,000 stores in over 70 international markets. Domino's had global retail sales of over $8.0 billion in 2013, comprised of nearly $3.8 billion in the U.S. and over $4.2 billion internationally. In the second quarter of 2014, Domino's had global retail sales of over $2.0 billion, comprised of $0.9 billion in the U.S. and $1.1 billion internationally. Its system is made up of franchise owners who accounted for nearly 97% of the Domino's Pizza stores as of the second quarter of 2014. The emphasis on technology innovation helped Domino's generate approximately 40% of U.S. sales from its digital channels in 2013, as well as reach an estimated $3 billion annually in global digital sales. Domino's recently launched its ordering app for iPad®, adding to an existing ordering app lineup that covers nearly 95% of the smartphone market. In June 2014, Domino's debuted voice ordering for its iPhone® and Android™ apps, a true technology first within both traditional and e-commerce retail.

Nuance Communications, Inc. (NUAN) is a leading provider of voice and language solutions for businesses and consumers around the world. Its technologies, applications and services make the user experience more compelling by transforming the way people interact with devices and systems. Every day, millions of users and thousands of businesses experience Nuance's proven applications. For more information, please visit: www.nuance.com