, /PRNewswire/ -- (NYSE:DPZ), the largest pizza company in the world based on global retail sales, crowned the 2018 World's Fastest Pizza Maker among 9,000 cheering spectators at in on . Lomker, a franchise owner in , made three large pizzas in an impressive 57 seconds – that's equal to making each pizza in roughly 19 seconds! Lomker won in prize money, a trophy and the coveted title of World's Fastest Pizza Maker, presented by Domino's President and CEO . 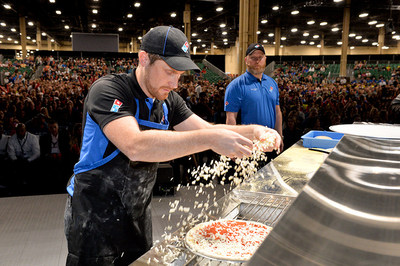 "Winning the World's Fastest Pizza Maker competition is absolutely amazing," said Lomker. "I feel very fortunate to bring an honor like this home to for the first time. It is such a blessing that I get to share this joy with my family, team members, coaches and all of team . They have continuously stood by me for over a decade and provided me with unconditional encouragement and support."

World's Fastest Pizza Maker finalists came from Domino's stores all around the world to compete. They had to hand-stretch fresh dough, sauce and top three large pizzas – one pepperoni, one mushroom and one cheese – as quickly as possible. While speed was important, it was not the only part of the equation in determining the World's Fastest Pizza Maker. This year, participants were graded on three criteria: dough/sauce, portioning of toppings and placement. Quality was scrutinized as two judges, highly qualified in Domino's standard pizza-making practices, inspected the stretching of the dough, application of the sauce and portioning of toppings during the competition. If the pizza was not perfect, time penalties were added to the final time or the pizza was disqualified.

Lomker has been a part of the Domino's brand his entire life, as his father is also a franchise owner. Lomker's earliest memories are of time spent passing out flyers and helping his parents at special events. His first in-store experience came assisting his parents in the stores during rush hour. Lomker now owns 10 Domino's locations throughout .

"Winning the title this year was especially important, because my father, who is battling pancreatic cancer, was able to be there as well," Lomker said. "While I received this award, he was inducted in the , a prestigious award given to exemplary franchise owners. I'm so proud of our accomplishments and thrilled we could share in each other's joys."

"We are thrilled to award the title of Domino's 2018 World's Fastest Pizza Maker to ," said Doyle. "Domino's and its franchise owners employ some of the greatest pizza makers in the world. The emphasis is on the quality of the pizza, while also using expertise to get them made quickly. We are known as the 'delivery experts' and our goal for everyone in Domino's stores is to get hot, great-tasting pizzas to customers' doors safely and efficiently. The World's Fastest Pizza Maker competition recognizes the champions that take pizza-making to an entirely different level."

About ®
Founded in 1960, is the largest pizza company in the world based on global retail sales, with a significant business in both delivery and carryout pizza. It ranks among the world's top public restaurant brands with a global enterprise of nearly 15,000 stores in over 85 markets. Domino's had global retail sales of over in 2017, with more than in the U.S. and more than internationally. In the first quarter of 2018, Domino's had global retail sales of over , with over in the U.S. and over internationally. Its system is comprised of independent franchise owners who accounted for over 97% of Domino's stores as of the first quarter of 2018. Emphasis on technology innovation helped Domino's achieve more than half of all global retail sales in 2017 from digital channels, primarily online ordering and mobile applications. In the U.S., Domino's generates over 60% of sales via digital channels and has produced several innovative ordering platforms, including Google Home, Facebook Messenger, Apple Watch, Amazon Echo, Twitter and text message using a pizza emoji. In late 2017, as part of an industry-first collaboration with , Domino's began a meaningful test of delivery using self-driving vehicles.