Customers can score loyalty points for any online, phone or in-store order of $10 or more

, /PRNewswire/ -- Game day is coming, and (NYSE: DPZ), the recognized world leader in pizza delivery and digital ordering platforms, has your food plan covered. With 15 different digital ways to order, along with a wide variety of products and more than 34 million possible pizza combinations, Domino's has the key players for a winning game day spread. 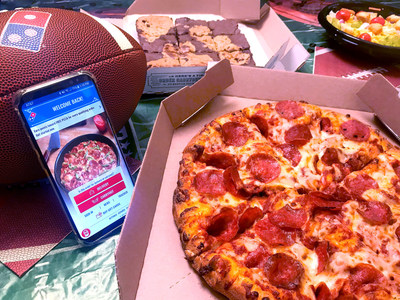 "Whether its via online, our iPhone app, Android app or any of our AnyWare ordering platforms, one thing is for sure: Domino's makes planning and ordering your game day feast simple," said , Domino's senior vice president and chief digital officer.

"Domino's makes ordering convenient for our customers, especially on the biggest football Sunday of the season," said Maloney. "Whether you're throwing a large party or just having a few friends over, Domino's has an ordering option for everyone to make sure hunger doesn't win."

Choosing the easiest ordering option isn't the only way customers can score big on game day. Those who are enrolled in Domino's Piece of the Pie Rewards® program can earn points simply by placing an order. Loyalty members will receive 10 points for any order of or more that they place online, by phone or in-store.

About ®
Founded in 1960, is the recognized world leader in pizza delivery, with a significant business in carryout pizza. It ranks among the world's top public restaurant brands with a global enterprise of more than 14,400 stores in over 85 international markets. Domino's had global retail sales of nearly in 2016, with more than in the U.S. and more than internationally. In the third quarter of 2017, Domino's had global retail sales of more than , with nearly in the U.S. and over internationally. Its system is comprised of independent franchise owners who accounted for over 97% of Domino's stores as of the third quarter of 2017. Emphasis on technology innovation helped Domino's reach an estimated in global digital sales in 2016, and has produced several innovative ordering platforms, including Google Home, Facebook Messenger, Apple Watch, Amazon Echo, Twitter and text message using a pizza emoji. In late 2017, as part of an industry-first collaboration with , Domino's began a meaningful test of delivery using self-driving vehicles.