Domino's® to Celebrate the Opening of 15,000th Store

, /PRNewswire/ -- (NYSE: DPZ), the largest pizza company in the world based on global retail sales, will open its 15,000th store in the coming weeks and is commemorating the achievement this week in . 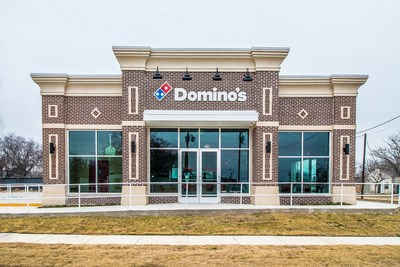 "This is a huge milestone for Domino's, as we've been opening roughly three stores a day around the world for the past few years," said , Domino's president and CEO. "We've opened more than 4,000 stores across the globe in the past four years, and we couldn't be more thrilled to commemorate our 15,000th store in the world, right here in ."

The commemorative 15,000th store, located at , will host a ribbon-cutting ceremony with Doyle, President of Domino's International and Lewisville Domino's franchise owner on at Gavitt will also present a donation to the , in honor of the 15,000th store.

"Having the community be a part of this milestone store means a great deal to me, as does being able to give back," said Gavitt. "The Domino's team and I are honored to support a great local organization that helps children who have been abused, as well as their families."

Gavitt owns 21 stores throughout the and areas. He began working at Domino's as a delivery driver in 1982 and worked his way up to become a franchisee in 2002. He is not alone – more than 90 percent of Domino's U.S. franchise owners began their career as part-time Domino's employees.

In 2017, Domino's had global retail sales of over , with more than in the U.S. and more than internationally. Domino's operates in more than 85 markets around the world.

About ®
Founded in 1960, is the largest pizza company in the world based on retail sales, with a significant business in both delivery and carryout pizza. It ranks among the world's top public restaurant brands with a global enterprise of more than 14,800 stores in over 85 markets. Domino's had global retail sales of over in 2017, with more than in the U.S. and more than internationally. In the fourth quarter of 2017, Domino's had global retail sales of nearly , with nearly in the U.S. and over internationally. Its system is comprised of independent franchise owners who accounted for over 97% of Domino's stores as of the fourth quarter of 2017. Emphasis on technology innovation helped Domino's achieve more than half of all global retail sales in 2017 from digital channels, primarily online ordering and mobile applications. In the U.S., Domino's generates over 60% of sales via digital channels and has produced several innovative ordering platforms, including Google Home, Facebook Messenger, Apple Watch, Amazon Echo, Twitter and text message using a pizza emoji. In late 2017, as part of an industry-first collaboration with , Domino's began a meaningful test of delivery using self-driving vehicles.