Domino's® to Celebrate the Opening of 16,000th Store

, /PRNewswire/ --  (NYSE:DPZ), the largest pizza company in the world based on global retail sales, is celebrating the monumental grand opening of its 16,000th store in the world today, in . 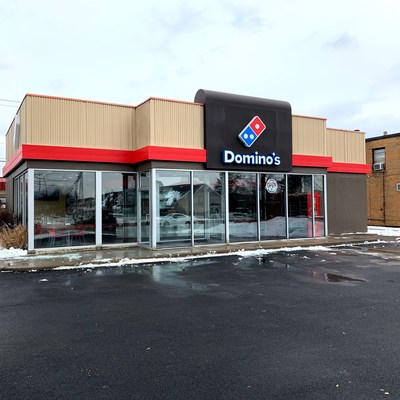 "This is an incredible milestone for Domino's, and I am beyond excited it is happening in ," said , Domino's president and CEO. "We've grown our total global store count by nearly 4,800 stores in the past five years, and we couldn't be more thrilled to commemorate our 16,000th store in the world, right here in ."

The commemorative 16,000th store, located at , will host a ribbon-cutting ceremony with Allison, COO & President of the Americas , , Domino's franchise owner and other key company executives on at Erwin will also present a donation to the , , in honor of the 16,000th store.

"Having the community be a part of this milestone is very meaningful to me, as does being able to give back to the community," said Erwin. "The Domino's team and I are honored to support a great local organization that helps cure cystic fibrosis and provides all people with the disease the opportunity to lead full, productive lives by funding research and drug development, promoting individualized treatment, and ensuring access to high-quality, specialized care.

Erwin began his career with Domino's in 1993 as a delivery driver. He purchased his first store in 1998 – just five years after joining the company. He now owns 37 stores throughout New , , and . He is not alone – more than 90 percent of Domino's U.S. franchise owners began their careers as delivery drivers or pizza makers in Domino's stores.

Founded in 1960, is the largest pizza company in the world based on retail sales, with a significant business in both delivery and carryout pizza. It ranks among the world's top public restaurant brands with a global enterprise of more than 15,900 stores in over 85 markets. Domino's had global retail sales of over in 2018, with nearly in the U.S. and more than internationally. In the fourth quarter of 2018, Domino's had global retail sales of over , with nearly in the U.S. and more than internationally. Its system is comprised of independent franchise owners who accounted for 98% of Domino's stores as of the fourth quarter of 2018. Emphasis on technology innovation helped Domino's achieve more than half of all global retail sales in 2018 from digital channels, primarily online ordering and mobile applications. In the U.S., Domino's generates over 65% of sales via digital channels and has produced several innovative ordering platforms, including Google Home, Facebook Messenger, Apple Watch, Amazon Echo, Twitter and text message using a pizza emoji. In late 2017, Domino's began an industry-first test of self-driving vehicle delivery with – and in , launched Domino's HotSpots®, featuring over 200,000 non-traditional delivery locations including parks, beaches, local landmarks and other unique gathering spots.