Domino's® Has Your Game Plans Covered

, /PRNewswire/ -- Looking to score big with your friends and family when it comes to the game day feast? Domino's (NYSE: DPZ) has you covered, thanks to its mix and match deal. 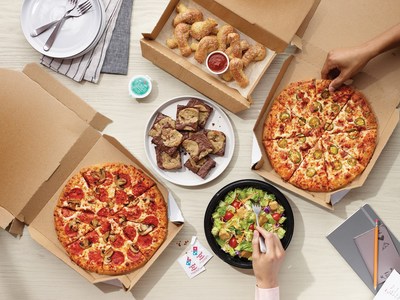 Whether you have pizza lovers, salad enthusiasts or football fanatics with a sweet tooth, the largest pizza company in the world based on global retail sales is sure to deliver a winning combination. Customers can choose any two or more items for just each: medium two-topping pizzas, Bread Twists, salads, Marbled Cookie Brownies, Specialty Chicken, Oven Baked Sandwiches, Stuffed Cheesy Bread, eight-piece orders of boneless chicken wings or pasta in a dish.

"Domino's is no stranger to the biggest football day of the year," said , Domino's spokesperson. "Every year, Domino's in-store team members dominate game day by delivering hot, delicious pizza to millions of households across the U.S. – leaving hungry customers with a full belly and happy taste buds. We're in the business of delivering deliciousness when you're short on time, don't feel like cooking or can't pull yourself away from the game – we have you covered."

Looking to order carryout instead of delivery? Swing by any store on your way to the party and take advantage of Domino's carryout deal: choose any three-topping pizza and crust (Hand Tossed, Handmade Pan, Crunchy Thin Crust, style or gluten free crust – excluding extra-large and specialty pizzas) for each.

About ®
Founded in 1960, is the largest pizza company in the world based on retail sales, with a significant business in both delivery and carryout pizza. It ranks among the world's top public restaurant brands with a global enterprise of more than 16,500 stores in over 85 markets. Domino's had global retail sales of over in 2018, with nearly in the U.S. and more than internationally. In the third quarter of 2019, Domino's had global retail sales of over , with over in the U.S. and over internationally. Its system is comprised of independent franchise owners who accounted for 98% of Domino's stores as of the third quarter of 2019. Emphasis on technology innovation helped Domino's achieve more than half of all global retail sales in 2018 from digital channels. In the U.S., Domino's generates over 65% of sales via digital channels and has developed several innovative ordering platforms, including those developed for Google Home, Facebook Messenger, Apple Watch, Amazon Echo and Twitter – as well as Domino's Hotspots®, an ordering platform featuring over 200,000 unique, non-traditional delivery locations. In late 2017, Domino's began an industry-first test of self-driving vehicle delivery, and in announced a partnership with , furthering its exploration and testing of autonomous pizza delivery.