Domino's® New Dinner Bell Brings Everyone Together for Pizza Night

, /PRNewswire/ --  (NYSE: DPZ), the largest pizza company in the world based on global retail sales, knows that technology and pizza can bring people together. Thanks to the new dinner bell function on Domino's mobile app, which launched today, getting everyone's eyes off their device and over to the dinner table just got easier! 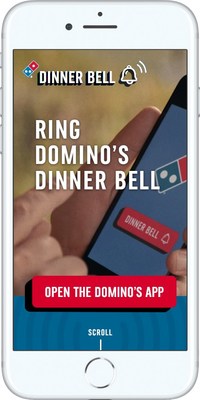 "Let's face it, sometimes yelling at everyone that pizza is here just doesn't work," said , Domino's chief digital officer. "Domino's virtual dinner bell makes that job easier, as it rings right on everyone's phones, no matter where they are, so that everyone is ready to enjoy their piping-hot pizza together."

To take advantage of Domino's dinner bell feature, customers must have the most recent version of Domino's mobile app and a Pizza Profile. Once logged in, customers can invite friends and family to join their dinner bell group. When the group leader places an order, they can ring the bell to notify family and friends that the order has been placed. When Domino's Tracker® says the order is out for delivery, it will automatically ring the bell again to remind everyone to get to the table ASAP.

More details on Domino's dinner bell can be found at www.dominos.com/dinnerbell.

About ®
Founded in 1960, is the largest pizza company in the world based on global retail sales, with a significant business in both delivery and carryout pizza. It ranks among the world's top public restaurant brands with a global enterprise of over 15,100 stores in over 85 markets. Domino's had global retail sales of over in 2017, with more than in the U.S. and more than internationally. In the second quarter of 2018, Domino's had global retail sales of nearly , with nearly in the U.S. and nearly internationally. Its system is comprised of independent franchise owners who accounted for over 97% of Domino's stores as of the second quarter of 2018. Emphasis on technology innovation helped Domino's achieve more than half of all global retail sales in 2017 from digital channels, primarily online ordering and mobile applications. In the U.S., Domino's generates over 60% of sales via digital channels and has produced several innovative ordering platforms, including Google Home, Facebook Messenger, Apple Watch, Amazon Echo, Twitter and text message using a pizza emoji. In late 2017, Domino's began an industry-first test of self-driving vehicle delivery with – and in , launched Domino's HotSpots™, featuring over 200,000 non-traditional delivery locations including parks, beaches, local landmarks and other unique gathering spots.