, /PRNewswire/ -- (NYSE: DPZ), the recognized world leader in pizza delivery, is celebrating the grand opening of its 14,000th store in in Cyberjaya, , outside of the nation's capital of . 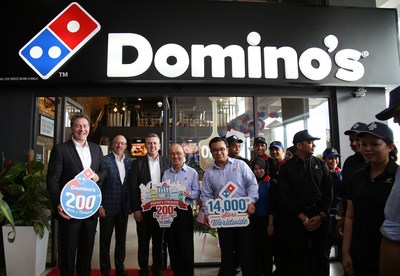 "It was just eight months ago that we cut the ribbon on our 13,000th store and here we are already celebrating another milestone – our 14,000th store," said , Domino's president and CEO. "Last year we were opening, on average, a new Domino's store every seven hours. Our global growth has been tremendous. The story of our brand is clearly one of incredible momentum and brand resonance worldwide."

The new store is also a milestone for the Malaysian market, as it marks their 200th store opening. It is also the 3,500th Domino's store in the . The master franchisee for the market, . Bhd., opened the first store in in 1997 and has successfully made Domino's one of the most recognized brands in the country.

Domino's 14,000th store features the pizza theater store design, which is open concept and brings the art and fun of pizza making to the forefront. It features indoor seating and allows customers to watch their pizzas being made, each step of the way. The milestone store is in the innovation hub of , Cyberjaya, as technology is a central focus of the brand in .

"We have been building beautiful new stores around world at an impressive pace, thanks to the hard work, commitment and passion of our franchisees worldwide," said , president of Domino's International. "Our goal to become the pizza company in the world – with the best customer service, serving high quality food, with inviting stores and leading technology – is being executed every day in countries like and around world."

Domino's operates in over 85 markets worldwide. Domino's had global retail sales of nearly in 2016, with more than in the U.S. and more than internationally.

About ®
Founded in 1960, is the recognized world leader in pizza delivery, with a significant business in carryout pizza. It ranks among the world's top public restaurant brands with a global enterprise of more than 13,800 stores in over 85 markets. Domino's had global retail sales of nearly in 2016, with more than in the U.S. and more than internationally. In the fourth quarter of 2016, Domino's had global retail sales of nearly , with over in the U.S. and over internationally. Its system is comprised of independent franchise owners who accounted for over 97% of Domino's stores as of the fourth quarter of 2016. Emphasis on technology innovation helped Domino's reach an estimated in global digital sales in 2016, and has produced several innovative ordering platforms including Google Home, Facebook Messenger, Apple Watch, Amazon Echo, Twitter and text message using a pizza emoji. In late 2015, Domino's announced the design and launch of the DXP®, a purpose-built pizza delivery vehicle, as well as Piece of the Pie Rewards™, its first digital customer loyalty program.

To view the original version on PR Newswire, visit:http://www.prnewswire.com/news-releases/dominos-opens-14000th-store-worldwide-300438173.html